Latest stuff from ESA and/or NASA : Rocky roads through Lanzarote 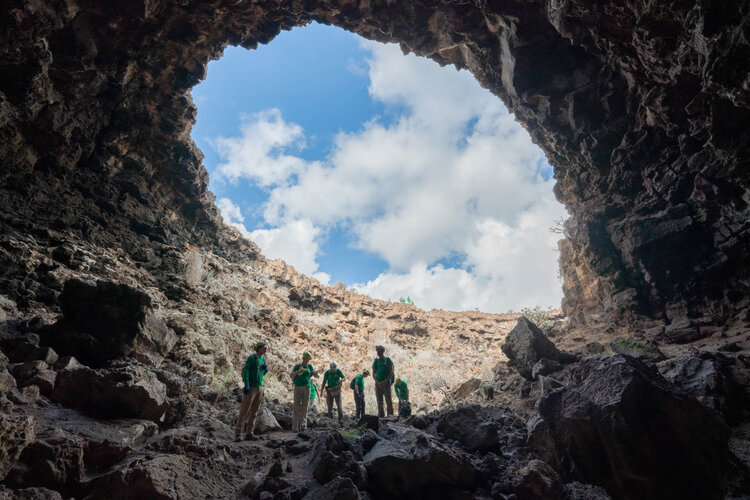 Take away the clouds, bulk up the humans with suits and add an orange-red filter and this could be an image from a future mission to Mars.

The actual site, the Corona lava tube in Lanzarote, Spain, is closer than one might think to the Red Planet.

That’s why participants of ESA’s Pangaea course came here this week for the third session of their planetary geology training.

Before ending up in one of Europe’s volcanic hotspots, Andreas, Kathleen and Robin learned how to describe geological sites, and how to classify rocks and identify traces of life during field trips to the Italian Dolomites and the Ries crater in Germany in September.

Lanzarote’s volcanic landscapes are exceptionally well-preserved, and the long history of geological activity make it a unique open-air museum. Here, basaltic lava flows resemble vast plains on the lunar maria and volcanoes are similar to those in some regions of Mars.

For an astronaut whose day job is the daily operations of the International Space Station at Mission Control in Houston, USA, Andreas admits that looking at rocks sounded kind of boring at first.

But in Lanzarote, Andreas and his crewmates were set loose on the Mars-like terrain to follow pre-planned geological investigation routes and analyse the mineralogy of the soil all while remaining in constant communication with the science and training teams with dedicated tools.

Now, Andreas has learned to see the rocks in a new light. “It’s intriguing to interpret the layers of the Earth where the rocks come from, and from there begin to understand the evolution of our planet,” he says.

Looking at rocks has led to an interesting three weeks for the astronaut, who would choose Mars as a destination for future spaceflight. Mars exploration might be in the distant horizon, but “still a fascinating place to visit,” he adds.

Pangaea – named after the ancient supercontinent – prepares the astronauts for geological expeditions to other planets. Trainees acquire skills and knowledge both in the field and in the classroom, tailored towards the needs of future planetary explorers.